Odds, predictions, trends, and news for the 2021 Week 1 Monday Night Football matchup between the Oakland Raiders and Baltimore Ravens. 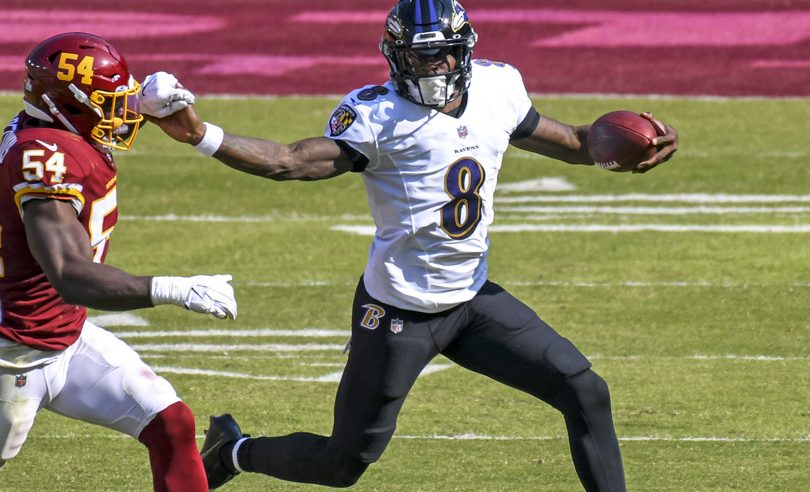 Baltimore and Las Vegas face off in the first Monday Night Football matchup of 2021. The Ravens come into the game with some question marks at the running back position, while the Raiders come in needing to make a leap in Jon Gruden’s fourth year with the team.

The Baltimore Ravens lost three different running backs to injury in the last two weeks: J.K. Dobbins, Gus Edwards, and Justice Hill. Ty’Son Williams, an undrafted 2020 free agent who played at BYU and was on the practice squad last year, inherits the starting role for Week 1. The team also signed veterans Latavius Murray (cut by New Orleans) and Le’Veon Bell (free agent) recently to address the running back issues. For a team that has relied heavily on the running game in recent years, question marks abound.

The Raiders moved to Las Vegas for the 2020 season, but the Monday Night Football game will be the first home game in Las Vegas that will be attended by fans.

Darren Waller Vs. His Old Team

Raiders star TE Darren Waller will be playing the season opener on his 29th birthday, against his former team. Waller had only 103 receiving yards in his career as a Raven, but has posted back-to-back years with more than 1,100 receiving yards. That includes having over 100 yards receiving in four of his last five games played.

That hot streak will be put to the test against the Ravens, who haven’t allowed a tight end to have 100 yards receiving in a game in the last five years. (The last TE to do it was Gary Barnidge of Cleveland in 2015.)

Here are our player projections for the Week 1 Monday Night Football game.

If you sign up as a new Caesars customer in one of the following states, you are eligible for the following Monday Night Football boosts on wagers of $100 or less:

Here are the signup links to take advantage: