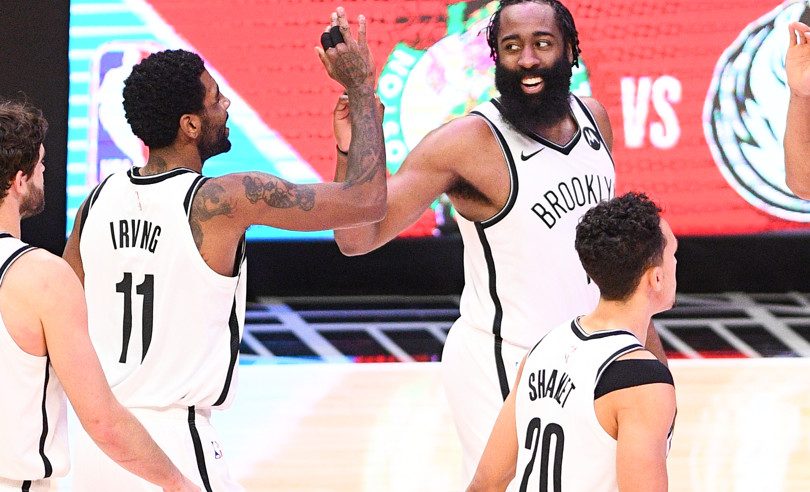 In this post, we’ll provide a snapshot of our team-level NBA preseason predictions for the 2021-22 season. We’ll also discuss a few highlights from the projections we think are worth noting.

Once the 2021-22 NBA season begins, our projected standings page will update every day based on the previous day’s results.

Even before the season starts, the numbers here may differ slightly from our NBA projected standings page. That isn’t us adjusting numbers behind the scenes; it’s just the result of variance in our season simulations, which re-run daily even in the preseason.

The Lakers have almost the same odds to get the West’s No. 1 seed as Utah, but they also face the toughest challenge to win a division. They are almost even with the team that knocked them out last year, the Phoenix Suns.

Meanwhile, the Dallas Mavericks are in the easiest division (Southwest) in the West. Several of their division foes are rebuilding, and only the Memphis Grizzlies project to finish (barely) over .500.

The Lakers have our highest championship odds from the West, even though they are projected to finish behind Utah in the regular season.

The Lakers turned over a lot of the roster after last year’s disappointing exit from the playoffs. However, they again have a star veteran core that will focus on being productive and healthier for the playoffs.

Unlike last offseason, they’ve also had more recovery time to get ready for this year.

The Lakers should bounce back from a disappointing regular season that put them in the play-in tournament. They’ll likely still rest some players on occasion, but with better injury luck and contributions from the bench, they should not be fighting for their playoff lives in April.

Meanwhile, Houston and Minnesota should improve after tough 2020-21 seasons.

The Timberwolves’ four leading scorers last season missed an average of 22 games. If they stay healthy and 2020 No. 1 overall pick Anthony Edwards builds off the impressive second half of his rookie season, they should be much better this year.

The Rockets collapsed after trading James Harden last year, but they wound up getting the second overall pick, which they used on Jalen Green. They aren’t likely to compete for a playoff spot yet, but they should be more competitive than they were last year.

Phoenix is expected to decline in wins, but that’s mostly just regression from a great season. Other teams in the Pacific Division like the Lakers and Warriors should be tougher than they were last year, too.

The Clippers’ expected decline is due to the indefinite absence of Kawhi Leonard. He’s recovering from a partially torn ACL and still has no clear timetable to return.

Meanwhile, the Spurs have been in steady decline in recent years. After a dominant 20-year run, they’re fresh off their first back-to-back losing seasons since the late 1980s.

Milwaukee is the heavy favorite again in the Central, with Chicago and Indiana the most likely challengers.

Brooklyn is also the odds-on favorite in the Atlantic Division. The East’s No. 1 seed last year, Philadelphia, is currently dealing with the fallout of Ben Simmons’ trade request and holdout.

The Miami Heat are favored in the Southeast Division, just ahead of Atlanta, in what looks like the tightest division race.

Regardless of whether they’ll have eventually have Kyrie Irving, the Nets have the best shot at winning the title this season. However, we still give them a 71% chance not to win it all.

If James Harden stays healthy, he and Kevin Durant might be good enough to carry the Nets on their own, and the team has plenty of depth around those two players.

The Bulls acquired Lonzo Ball, DeMar DeRozan and Alex Caruso this offseason. They should fight for a playoff spot this year after missing out on the play-in tournament last season.

Toronto couldn’t play at home because of travel restrictions last year and lost Kyle Lowry in free agency. However, the Raptors weren’t as bad last season as their record would suggest.

Boston also had a disappointing season, finishing at .500 after a run to the Eastern Conference Finals the year prior. The Celtics should bounce back this year, particularly after adding Al Horford, Dennis Schroder and Josh Richardson this offseason.

The Sixers finished last season atop the Eastern Conference, but they’re expected to fall back to the pack this year. Simmons has demanded a trade, though he has now reported to camp (money talks), but his attitude and desire to play for the franchise threatens to derail Philadelphia early on.

The New York Knicks were big overachievers in head coach Tom Thibodeau’s first season. Even though they added Kemba Walker and Evan Fournier in free agency, they’re likely to regress a bit this year.

The Wizards traded away Russell Westbrook after only one season. With Bradley Beal able to become a free agent next summer, they might have to consider trading him if they get off to a slow start.

How We Make NBA Preseason Projections

Our projections are based on our 2021-22 NBA preseason ratings. We use those ratings to simulate the full 2021-22 NBA season, including the playoffs, thousands of times.

(Starting last season, we also introduced a few adjustments to NBA team ratings for the playoffs to better account for player/minute distributions. Teams typically shorten their rotations and give more minutes to their top players in the postseason, and our ratings now do a better job of adjusting for that effect.)

We average the individual team outcomes in the thousands of season simulations that we run, and those averages become our official preseason projections.

Injuries and Other Roster Changes

As they do every season, injuries and trades will derail at least a few of our preseason forecasts. That’s an inevitable risk of trying to predict the distant future. However, we do incorporate variance into our season simulations to help account for those possibilities.

The projections below are the average results from thousands of simulations. In any individual simulation (or in the real season), some teams will do significantly better or worse than our average projection. But we don’t know which teams those will be. Because of this dynamic, the preseason projections generally look a little conservative at the extreme ends.

Making NBA Futures Bets Based On These Predictions

We also want to provide some quick thoughts to the NBA bettors out there.

If you’re considering using the information here to make NBA futures bets (e.g. a preseason bet on a team’s regular-season win total, or on a team to win its division or the NBA championship), please keep a few things in mind.

Identifying value in current NBA futures odds based on our preseason projections requires a more involved process than we cover here. We’ve previously written about how to evaluate futures odds, which you should read if you’re considering betting NBA futures.

Our projections apply only a few rough adjustments to model the shortened rotations seen in the NBA playoffs. So, playoff advancement odds may be a relative weak spot in our model.

We have yet to calculate the historical profits or losses that would have resulted from making futures bets wherever our preseason NBA projections indicated there was an edge, or for a select subset of those bets (e.g. the biggest outliers compared to betting market odds).

If our projections are very far off consensus futures odds in the NBA betting markets, we’re more likely to believe that our models are missing something (and that we should go back and adjust our team ratings) than to believe we’ve uncovered some huge betting edge that no one else realizes.

Plenty of these season projections will end up being wrong, for lots of possible reasons. It’s important to understand that our goal is the overall accuracy of the system, and in particular the team ratings and projected regular-season win-loss records.

Even if the system as a whole ends up being more accurate than other NBA pundits or prediction methods, projections for any one specific team could still be far off that team’s actual results.

The value we bring to the table here is a systematic, data-driven approach that more precisely evaluates dynamics that human experts are typically bad at evaluating (e.g. the impact of schedule strength, or accounting for variance in expected team performance). Our system is driven not by subjective opinions, but by data that has demonstrated predictive value.

It isn’t perfect, but it’s far more sophisticated and objective than a lot of what’s out there.