We present our 2021-22 preseason rankings and predictive ratings for all 30 NBA teams, from No. 1 Brooklyn to the No. 30 Orlando. 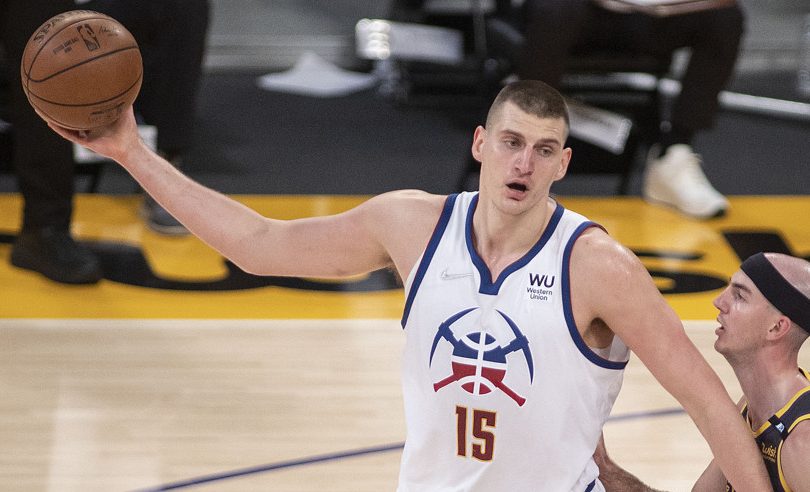 The 2021-22 NBA season tips off next week, so it’s time to release our preseason predictive ratings and rankings for all NBA teams.

In addition to posting the rankings and some related commentary, we’ll also provide an overview of the methods we use to rank teams. For all of the details there, you can read our post explaining how we make NBA preseason rankings.

The table below shows our 2021-22 preseason ranking for all 30 NBA teams, along with each team’s associated predictive rating for the regular season.

Last year, we began making a few adjustments to NBA team ratings for the playoffs. The ratings in the table below represent our regular-season predictive ratings. These ratings determine win odds for regular-season games, and we use them to project outcomes like regular-season win totals and division-winner odds.

Team ratings are expressed as points better (positive rating) or worse (negative rating) than a “perfectly average” NBA team when playing on a neutral court.

Last Year Rating means each team’s final predictive rating from the 2020-21 season, and Change represents the difference between Last Year Rating and this year’s preseason rating.

The final two columns show info about the win total projections of the component systems that we blended in order to create our ratings. We’ll explain how that works in more detail below.

Nets Just Ahead of Bucks

The Brooklyn Nets come in just ahead of the Milwaukee Bucks in our regular-season ratings, even though the Bucks are the defending NBA champions. Remember, these two went to overtime in Game 7 of the Eastern Conference Semifinals last year, so the outcome was very close to being different.

The Nets were without Kyrie Irving in that series. James Harden also played sparingly against Milwaukee because of a hamstring injury. The news about the Nets not permitting Irving to participate on a part-time basis broke after these projections were run. That said, Kyrie’s stance and limited availability was already known, so it’s not completely unaccounted in the rankings.

But make sure to check our rankings pages for the most up-to-date rankings this year, as the season progresses.

Miami Expected to Heat Back Up

The Miami Heat made a surprise run to the NBA Finals in the Orlando bubble in 2020. However, that extended playoff run and shortened offseason may have contributed to a down 2020-21 campaign.

After finishing as the No. 6 seed in the East last year, the Heat are expected to rebound this season. They’re our No. 7 overall team.

Key Injuries Are Impacting Some Ratings

Over the last few years, we’ve seen some big player moves that transformed teams. The Lakers won a title in Anthony Davis’ first season with them in 2019-20, and the Nets nearly did the same with Kevin Durant last year.

The biggest name to move this offseason was Russell Westbrook to the Lakers. While the Lakers should bounce back in the regular season, they will jump more in our playoff ratings since they are likely to rest Westbrook, Davis, and LeBron James throughout the season.

Here’s a full summary of player movement for the 2021-22 season. Some other notable moves this offseason:

How We Create Our NBA Preseason Rankings

If you’re curious, here’s a brief overview of how we come up with these preseason ratings.

For some of our sport ratings (like the NFL), we’ve done extensive historical research to identify team-level stats that are highly correlated with success. We then create models using those stats and blend our model output with betting market info to create our final preseason ratings.

We used to take that same approach with our NBA preseason ratings. However, those projections were less accurate than the betting market and some other publicly available advanced NBA ratings systems.

We suspect that the main reasons for this are:

Player Skill Matters Most in the NBA

The relative impact of individual player skill compared to team-level data and history (e.g. the coaching system or franchise/program performance in recent years) is much greater in the NBA than it is in NFL or college football.

Across all sports, we’ve concentrated most of our in-house research on team-level metrics vs. player-level metrics. That approach seems to work better for some sports than others. (The main exception is quarterback, which is the one position that we do explicitly adjust for in our NFL preseason ratings.)

The NBA analytics community has made massive strides in developing meaningful metrics compared to their NFL and college football counterparts. That’s in part because there’s much better data available for NBA players. (Try to evaluate college football or NFL offensive linemen based only on box score info.)

Rather than stick with our typical team-level approach, we now create our NBA preseason ratings by blending several player-level models from other sources with team win-total projections from the betting market.

If you want to dive deeper into our process, please see our detailed explanation of how we make NBA preseason team ratings.

Before you slam us for thinking your favorite NBA team will be worse than you expect this year, keep the following in mind:

The inputs that power our preseason team ratings mostly aim to maximize overall accuracy across all 30 NBA teams. This approach is going to get plenty of individual teams wrong for all sorts of reasons. By combining several leading NBA systems, we dampen that effect somewhat since a unique quirk of one system may not exist in the others. If we wanted to maximize the odds of making the most accurate projection for one specific team, we’d likely take a different approach.

Don’t be surprised if your favorite sportscaster, blogger or national poll ranks your favorite team No. 5 while we think they’re No. 10. Different approaches for evaluating teams will yield different results. Just keep in mind that we’ve done plenty of research to figure out which approaches have been the most accurate.

Look at Ratings, Not Just Rankings

For example, this year, the difference between No. 6 Philadelphia and No. 7 Miami is 0.8 points. That’s about the same as the difference between No. 7 Miami and No. 12 Boston. In other words, even though the Heat are ranked No. 7, they’re just about as close to being No. 12 as they are No. 6. So, it’s important to not just compare where teams rank, but how they are grouped and how closely the ratings are to each other.

The Accuracy of Preseason Ratings Needs To Be Judged Relatively

It’s easy to quote a stat like, “Wow, you guys got [insert number here] teams really wrong last year.” But keep in mind that many unexpected things can happen during a season to torpedo the accuracy of preseason rankings. Random bad-luck injuries, trades or a midseason decision to tank will all affect a team’s trajectory.

In theory, you could try to model those possibilities, and our season simulations do factor in potential variance in each team’s rating. Still, every season will feature a number of unpredictable events, and judging the accuracy of a preseason ratings system needs to take that into context.