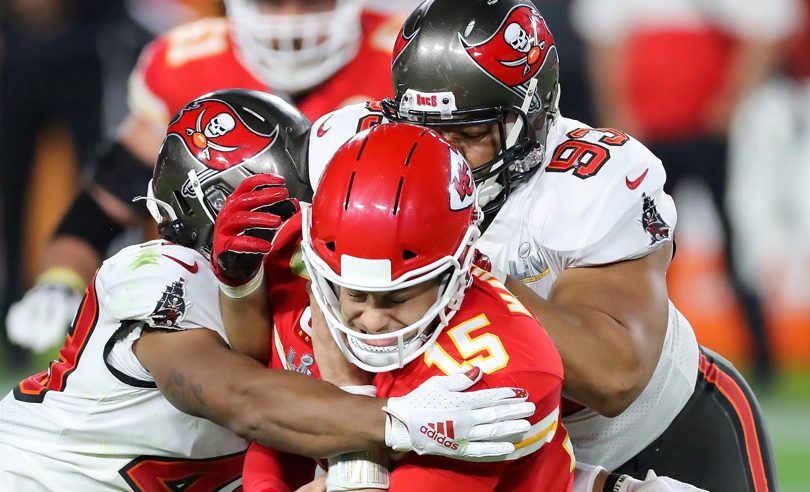 Kansas City and Tampa Bay lead the projections for earning the No. 1 seed in the 2021 NFL season (Photo by Cliff Welch/Icon Sportswire)

Below are the TeamRankings 2021 NFL preseason predictions, including  win/loss records, final standings, playoff odds and Super Bowl win odds for all 32 teams.

We’ve also included a few highlights that stick out from the numbers, plus some tips on how to interpret these predictions.

Before we get to the 2021 predictions, a quick note on their historical accuracy. Significant year to year accuracy fluctuations are always possible, but so far our preseason NFL predictions have proven to be been quite solid.

Michael Lopez, the NFL’s current Director of Data and Analytics, found our preseason projections to be the most accurate system he studied in both 2013 and 2014. TeamRankings was also the only system he tracked that was more accurate than Vegas preseason win totals in both years.

Michael stopped his study after 2014, but we’ve continued to track our win/loss results against win totals lines from leading sportsbooks. Over the last 10 NFL season, when our projected win distribution indicated there was at least 10% “return on investment” value on betting either the Over or the Under on a NFL team win total, our preseason prediction’s implied picks are up +14.0 units.

Remember that during the regular season and playoffs, we update these predictions every day on our NFL projected standings page. These predictions are based on our preseason ratings, which have also been released.

Additional Info:
How do we come up with these predictions?
Exactly what do these numbers mean?
Why does our approach make sense?

Remember, the NFL expanded to a 17-game schedule, and this year, all the AFC teams get to host an NFC team in that extra game.

Kansas City, followed by Baltimore and Buffalo, lead the way in our projected odds to reach the playoffs. But those are the only three teams with a greater than 60% chance of reaching the playoffs in the AFC, a conference with a fairly large middle class in 2021. Only Houston is given less than a 10% chance of reaching the postseason, making the race for the wildcard spots in the AFC pretty wide open entering the year.

Biggest Expected Increase In Wins:
Jacksonville (from 1 to 6.7) followed by the New York Jets (2 to 6.0)

The teams with the two highest win projections in the NFC also happen to be the two teams that have represented the NFC in the last two Super Bowls. Tampa Bay leads the way, and also benefits from a division with plenty of turnover as the New Orleans Saints will be without Drew Brees at quarterback for the first time in 16 years.

San Francisco, meanwhile, will look to rebound from a frustrating season derailed by injuries a year ago, and are the team with the highest projected odds of reaching the playoffs from the deepest division in the NFL, the NFC West.

The uncertain status of Aaron Rodgers is looming over Green Bay, and our current win projection does include some risk that he leaves. If he really is playing elsewhere in 2021, that projection will dip even further. Conversely, if he is definitely still the quarterback for the Packers heading into the opening week, Green Bay’s projected chances of winning the NFC North will rise a bit.

Since 2002, a last-place division finisher has jumped to first place the next season no less than 21 different times. That’s slightly more than 1 last-to-first jump per season, on average. Last year, it was Washington pulling it off in the NFC East, where 7-9 was good enough to qualify for the playoffs.

Our projections this year have San Francisco (33% chance) as the favorite in their division, while Philadelphia (20%) is next most likely.

When you add up of all of the probabilities, you would expect an average of about 1.0 division winners from this group.

Based on our preseason predictions, we can project the overall playoff picture for each conference at the close of the 2021 regular season.

Kansas City, Baltimore, and Buffalo are atop the playoff projections. Indianapolis gets a slight nod over Tennessee in the AFC South for the final division winner slot. Meanwhile, New England is projected back in the postseason after a year away. Not much separates just making the wildcard field and missing out in the AFC.

Dallas gets the No. 4 seed and NFC East spot, narrowly, over Washington, though that’s nearly a dead heat. Interestingly, Dallas has fewer projected wins than every NFC wildcard team, and the top two teams to just miss the playoffs, following last season when the NFC East winner (Washington) had a losing record.

How We Create Our 2021 NFL Preseason Predictions

As we noted in our explainer article on how we create NFL preseason rankings, we have identified a set of team-level metrics that have demonstrated utility for projecting a team’s upcoming season results.

We identified these metrics by reviewing over a decade’s worth of NFL data and applying significance tests to any interesting looking findings. We built an algorithmic model that uses the metrics with predictive power as inputs, and computes a preseason predictive rating for all 32 NFL teams.

A team’s preseason rating signifies how good we think it will be this coming season. Figuring out how many games we expect that team to win or how likely it is to make the playoffs, however, is a more complicated problem. To do that, we run thousands of computer simulations of the 2021 NFL season, using our predictive ratings to come up with implied win odds for each game.

Thanks to randomness, each season simulation plays out differently. Occasionally an unheralded team like Detroit or Houston gets lucky, makes a run and once in a blue moon, even wins the Super Bowl.

Over thousands of simulation runs, though, patterns in the results begin to emerge. The 2021 NFL preseason predictions presented in this post represent the averages of the thousands of season simulations we conducted.

Exactly What Do These 2021 NFL Preseason Predictions Mean?

It’s important to understand how our system generates the results it does, and precisely what they mean. Here are the key details:

Why Is A Simulation-Driven Approach Valuable?

Despite some limitations, our data- and simulation-driven approach to making preseason NFL predictions has some clear advantages over alternative prediction methods.

Human NFL “experts” (some of them, at least) can be decent at projecting the future performance level of a team — especially one they’ve studied closely. But on the whole, humans tend to have a poor grasp of the potential impacts of probability and randomness over the course of a full NFL season.

For example, even knowledgeable “football people” tend to underestimate a great team’s odds of losing to a mediocre or bad team. To simplify the process of projecting team win totals, people often group games into broad categories like “easy win,” “likely win,” “toss-up,” etc. The implicit assumption is that easy win = definite win.

While it’s true that a team like Buffalo is unlikely to lose to a team like Houston, upsets happen routinely in today’s NFL, and those small probabilities keep adding up game after game. So you can’t discount them, especially when division titles can be decided by just one win.

Running thousands of computer simulations of the 2021 NFL season, and directly observing the distribution of outcomes generated by all the various probabilities, is a much more objective and precise way to understand what is likely to happen.

If you’re in an NFL pool or you’re betting games this season, check out our Football Pick’em Picks, NFL Survivor Picks, and NFL Betting Picks.