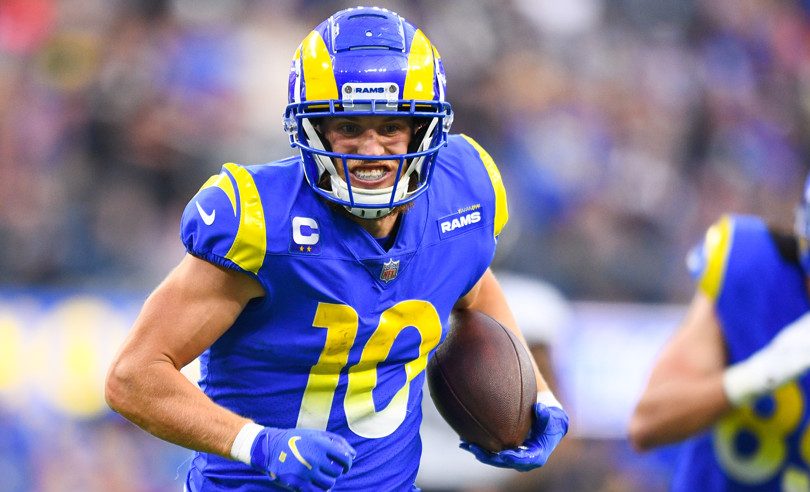 The Rams will try to repeat as champs, but it's a wide open race in 2022 (Brian Rothmuller/Icon Sportswire)

Below are the TeamRankings 2022 NFL preseason predictions, including  win/loss records, final standings, playoff odds and Super Bowl win odds for all 32 teams.

These predictions are being initially published in May of 2022, after the NFL Draft and free agency had concluded. Notable trades, injuries, and suspensions, especially at the QB position, could shift these predictions slightly, so check back before the opening kickoff to the 2022 season for the latest.

We’ve also included a few highlights that stick out from the numbers, plus some tips on how to interpret these predictions.

Before we get to the 2022 predictions, a quick note on their historical accuracy. Significant year-to-year accuracy fluctuations are always possible, but so far our preseason NFL predictions have proven to be been quite solid.

Michael Lopez, the NFL’s current Director of Data and Analytics, found our preseason projections to be the most accurate system he studied in both 2013 and 2014. TeamRankings was also the only system he tracked that was more accurate than Vegas preseason win totals in both years.

Michael stopped his study after 2014, but we’ve continued to track our win/loss results against win totals lines from leading sportsbooks. Since 2011, when our projected win distribution indicated there was at least 10% “return on investment” value on betting either the Over or the Under on a NFL team win total, our preseason prediction’s implied picks are up +14.5 units.

Remember that during the regular season and playoffs, we update these predictions every day on our NFL projected standings page. These predictions are based on our preseason ratings, which have also been released.

Quick Links To Additional Info:
How do we come up with these predictions?
Exactly what do these numbers mean?
Why does our approach make sense?

The AFC has some top contenders, but also a large middle class and few teams truly predicted to be at the bottom of the league.

As a result, the playoff odds are a bit tighter in 2022, with the Buffalo Bills being the only team with over 65% playoff odds entering the season. Meanwhile, only four teams (Pittsburgh, Jacksonville, New York Jets, and Houston) are given less than a 35% chance of making the postseason.

Not much separates the dividing line for the playoff spots in the AFC. Tennessee (9.2), Cincinnati (9.2), New England (9.1), and Cleveland (9.0) are in a virtual tie for the last playoff spot in our projections right now, and any further news or updates could shift which team is predicted in the postseason by September.

The teams with the two highest win projections in the NFC were the top two seeds a year ago, though both have some question marks at wide receiver entering the season. Tampa Bay has some turnover in the receiving corps early on, as we await news about whether Rob Gronkowski is officially returning to join Tom Brady, and Chris Godwin is coming back from a knee injury that could keep him sidelined as the season begins. Meanwhile, Green Bay will be without wide receiver Davante Adams, who was traded to Las Vegas.

The NFC has a smaller middle class than the AFC, as only three teams (Minnesota, Arizona, and New Orleans) are projected for between 8.0 and 9.0 wins.

Since 2002, a last-place division finisher has jumped to first place the next season no less than 22 different times. That’s slightly more than one last-to-first jump per season, on average. Last year, the Cincinnati Bengals broke through to win the AFC North and go on a run all the way to the Super Bowl.

Our projections only gave Cincinnati a 4% chance last season, though the eight last-place finishers combined to add to an expected 1.0 last-to-first teams. So while picking out the identity of the surprises may be individually difficult, our odds were right in line with the results.

Our projections this year have Baltimore (35% chance) as the favorite in their division, with Lamar Jackson returning from an injury, while Denver (27%) is next most likely now that they have QB Russell Wilson.

When you add up of all of the probabilities, you would expect an average of about 1.0 division winners from this group.

Based on our preseason predictions, we can project the overall playoff picture for each conference at the close of the 2022 regular season.

The AFC playoff picture is very muddled. Our playoff odds are based on the results of simulations, with the average results reported here. But the dynamics of this year’s AFC makes it more difficult to accurately predict the playoff participants.

We list the Titans as the seventh team to make it, since technically they have the highest overall playoff odds of the group of teams with between 9.2 and 9.0 wins.

But Tennessee has those odds because of the division they play in, the AFC South, which looks like a two-team race right now between the Colts and Titans. However, the actual odds that an AFC Wild Card team comes from the AFC South are relatively low. If we throw out the simulations where Tennessee wins the division, the team only wins the Wild Card in 21% chance of the remaining sims.

That’s a lower rate than if we do the same exercise for New England, Cincinnati, or Cleveland. Which means that while Tennessee is (slightly) more likely to make the playoffs than NE/CIN/CLE, by having Tennessee and Indianapolis both in the field, we are less likely to get both right (but also unlikely to get neither right).

The AFC West is also very tough, and even though we project three teams from that division as among the most likely playoff teams, the chances that all three get in are impacted by each other. Los Angeles and Denver, for example, are both at 10.0 wins, which is above the cutline. But in most scenarios where Kansas City wins the division, only one of the Broncos or Chargers are likely to make the playoffs. Still, we do project around a 20-25% chance that three AFC West teams reach the postseason.

Add all of the percentages up, and you would actually expect only 4.3 of the the top seven teams listed in the table above to make the playoffs this year. So if you are looking at that list above and disagree a little about the order, that’s okay. It’s going to be relatively more difficult to get the AFC right in 2022.

Unlike the AFC, the NFC has more haves and, just as importantly when evaluating playoff odds, have-nots. Four teams have playoff odds over 70%, and they are the same four teams that won the divisions a year ago.

San Francisco, Philadelphia, and Minnesota then follow as the predicted Wild Card teams, with Arizona neck-and-neck with Minnesota for the final spot. A year ago, Minnesota just missed out on the playoffs with a couple of late losses, and now they will hope to return with a new coach in place in Kevin O’Connell.

With Philadelphia trending upward (and recently trading for WR A.J. Brown), San Francisco closing strong and moving to second-year QB Trey Lance, and Minnesota having a potent offense and new coach, Arizona is the odd team out in this year’s projections. The Cardinals outperformed expectations a year ago in the first half of the season, jumping out to a 7-0 start. But they floundered down the stretch, losing 7 of the last 11 games.

How We Create Our 2022 NFL Preseason Predictions

As we noted in our explainer article on how we create NFL preseason rankings, we have identified a set of team-level metrics that have demonstrated utility for projecting a team’s upcoming season results.

We identified these metrics by reviewing over a decade’s worth of NFL data and applying significance tests to any interesting looking findings. We built an algorithmic model that uses the metrics with predictive power as inputs, and computes a preseason predictive rating for all 32 NFL teams.

A team’s preseason rating signifies how good we think it will be this coming season. Figuring out how many games we expect that team to win or how likely it is to make the playoffs, however, is a more complicated problem. To do that, we run thousands of computer simulations of the 2022 NFL season, using our predictive ratings to come up with implied win odds for each game.

Thanks to randomness, each season simulation plays out differently. Occasionally an unheralded team like Detroit or Houston gets lucky, makes a run and once in a blue moon, even wins the Super Bowl.

Over thousands of simulation runs, though, patterns in the results begin to emerge. The 2022 NFL preseason predictions presented in this post represent the averages of the thousands of season simulations we conducted.

Exactly What Do These 2022 NFL Preseason Predictions Mean?

It’s important to understand how our system generates the results it does, and precisely what they mean. Here are the key details:

Why Is A Simulation-Driven Approach Valuable?

Despite some limitations, our data- and simulation-driven approach to making preseason NFL predictions has some clear advantages over alternative prediction methods.

Human NFL “experts” (some of them, at least) can be decent at projecting the future performance level of a team — especially one they’ve studied closely. But on the whole, humans tend to have a poor grasp of the potential impacts of probability and randomness over the course of a full NFL season.

For example, even knowledgeable “football people” tend to underestimate a great team’s odds of losing to a mediocre or bad team. To simplify the process of projecting team win totals, people often group games into broad categories like “easy win,” “likely win,” “toss-up,” etc. The implicit assumption is that easy win = definite win.

While it’s true that a team like Buffalo is unlikely to lose to a team like Houston, upsets happen routinely in today’s NFL, and those small probabilities keep adding up game after game. So you can’t discount them, especially when division titles can be decided by just one win. Just last year, Buffalo, who ended up as the highest-rated team in our rankings, and a Super Bowl contender, lost to Jacksonville, the team that earned the top overall pick in the NFL Draft.

Running thousands of computer simulations of the 2022 NFL season, and directly observing the distribution of outcomes generated by all the various probabilities, is a much more objective and precise way to understand what is likely to happen.