Want to know what goes into our NBA preseason rankings? Here's an explanation of the methodology for how we generate the preseason ratings and rankings. 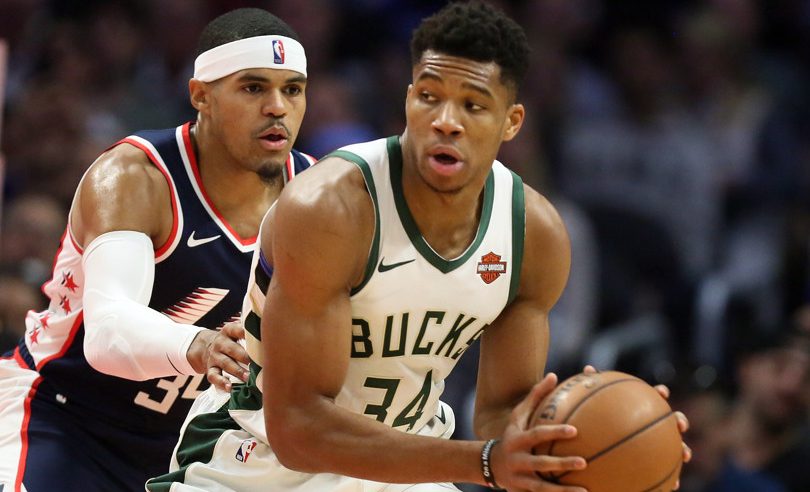 This post describes our methodology and process for creating NBA preseason rankings for all 30 teams.

We’re data people, so as one should expect from TeamRankings, our NBA preseason rankings are primarily driven by stats and modeling, and not by less objective methods like film study or media scouting reports.

Before we dive into the details of our approach, though, let’s first cover a few basics.

Editors Note: You can sign up for algorithmic NBA picks and predictions (game winner, point spread, over/under, and money line) for all 2020-21 games on our signup page.

What Our NBA Preseason Rankings Represent

It’s important to know that our preseason rankings simply represent the rank order of preseason predictive ratings that we generate for every NBA team.

So the first step in our process is to calculate preseason team ratings.

In simple terms, an NBA team’s predictive rating is a number that represents the margin of victory we expect when that team plays a “perfectly average” opponent on a neutral court.

This rating can be a positive or negative number; the higher the rating, the better the team. A rating of 0.0 indicates a perfectly average team.

How Ratings Translate To Game Predictions

Because our NBA predictive ratings are measured in points, the difference in rating between any two teams indicates the projected winner and margin of victory in a neutral-site game between them. For example:

Ratings Are More Precise Than Rankings

Understanding the nature of a predictive rating is helpful, because it is more precise than a ranking.

If you put a gun to our head and told us to rank order every NBA team, we’d say the Heat are going to be a better team than Golden State this season. But the difference is so small that it’s practically meaningless.

So in terms of expected performance level this year, the Heat are a closer to the five teams below them, than they are to the team directly above them in the rankings.

Put another way, based on how teams are bunched up in the ratings, preseason No. 7 Miami finishing the year at No. 10 or No. 11 would be less surprising than the Heat finishing No. 6.

In short, don’t place too much stock in a team’s ranking. Ratings tell a more refined story.

Why We Make NBA Preseason Ratings

Once the season starts, our predictive ratings go on autopilot. As game results come in, our system automatically adjusts team ratings (and the resulting rankings) each morning, based on the results of the previous day’s games.

Generating preseason ratings, however, involves a more labor-intensive process that we go through before every new season starts. In short, we are trying to pre-calibrate our NBA predictive ratings system. We want to give it a smarter starting point than simply having every team start the season with a 0.0 rating.

In other words, our preseason ratings are our first prediction of what we think every NBA team’s predictive rating will be at the end of the upcoming season. And we need to make that prediction before any regular season games are played.

How We Make NBA Preseason Ratings

For our NFL and college football ratings, we do historical research to identify and value team-level stats that are highly correlated with success in an upcoming season.

We then create predictive models using those stats, and blend our model outputs with betting market information to create our final preseason ratings.

Once upon a time, we took that same approach with our NBA preseason ratings. However, we found that our projections using that approach were less accurate than the betting market alone. They were also less accurate than other advanced, publicly available systems that do extensive player-level modeling.

We suspect that the main reasons for this are:

So rather than stick with our typical team-level approach, we now create our NBA preseason ratings by blending several player-level models from other sources with implied projections from the betting market.

We determine which player-level models to include based on their past accuracy in predicting season win totals, and we update the blend of models each season.

More specifically, here are the steps we take in compiling our ratings:

(Doing #4 above is an iterative process. We start with every team rated 0.0 and calculate expected win totals based on those ratings. Then, we compare the results to the target win totals. Then, we adjust the ratings for each team a little bit in the direction that ought to move their projection closer to the target total. We repeat those steps until the ratings stabilize.)

What we’re left with in the end is the predictive power ratings that are implied by the consensus win totals.

There are many different ways to make preseason team rankings for the NBA.

The approaches can vary greatly, from media power rankings to “expert” analysis, from building complex statistical models to making inferences from futures odds in the betting markets.

And speaking frankly, there’s plenty of crap out there from a predictive standpoint. But there’s also no Holy Grail (yet).

Pitfalls Abound, And We’ll Get Plenty Of Things Wrong

Within ten seconds of looking over our preseason NBA rankings, you’ll probably find several rankings you disagree with, or that differ from what other “experts” or ranking systems think. That’s to be expected. Different methods produce different results.

When the dust settles at the end of the season, our NBA preseason ratings, and the various projections we generate using them, will almost certainly be way off for a few teams. As happens every year, some teams simply defy expectations thanks to surprise breakout performances, while other teams are impacted by injuries, or trading away superstars.

Some NBA franchises may even go into tank mode during a season if they feel there is nothing to be accomplished by accumulating wins that put them just outside the playoffs anyway.

An Imperfect System Can Still Serve A Useful Purpose

Despite all of these challenges, the primary goal of our preseason analysis is simply to provide a baseline rating for each team (known as a “prior” in statistical terms) that makes our system better at predicting the results of regular season NBA games.

We’re most concerned about the overall accuracy of the system — that is, how good it is at predicting where every predictive rating for every NBA team will end up at the end of the upcoming season.

For that purpose, this approach has delivered solid results so far. If our preseason ratings didn’t improve our NBA predictions in a demonstrable way, we would stop doing them.