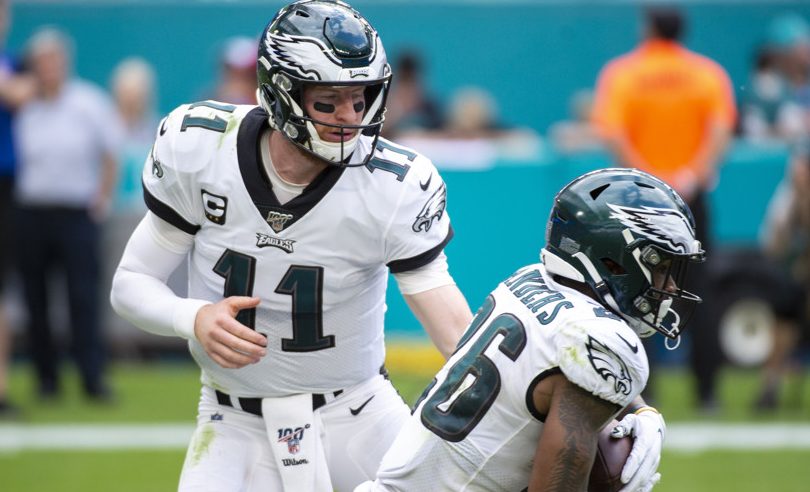 Where do Carson Wentz and Miles Sanders fall in our rankings versus average draft position? (Photo by Doug Murray/Icon Sportswire)

We’ve compiled average draft position from four major sources per position below as we try to mine the best values, regardless if your draft will take place using one of these online draft rooms or in your cousin Vinny’s basement. While it’s not an apples-to-apples comparison, TR users familiar with our pool strategy products and content can liken ADP to public pick percentage. If you were to use our fantasy football rankings, you probably wouldn’t end up drafting players whose ADP is significantly higher than where we have them ranked. You would be much more likely to own players who we rank higher than the ADP sources.

Smart drafters also try to figure out where they need to take a player. If we project two players as fourth-round picks, and one has an ADP in the fourth round, and another in seventh round, the smart strategy is to take the one most likely to be drafted soon first, and still try to get the other one in a subsequent round, before his ADP.

It should be noted that the scoring system for each of these sources is slightly different, and therefore it’s recommended that you use the average draft position of the source or scoring system that mostly closely matches your own draft. We’ve listed some of the differences in each scoring system below:

Holy smokes, do CBS players like their elite quarterbacks. Patrick Mahomes and Lamar Jackson are being drafted in the top seven, but they don’t quite reach that value in our points projections. The “6 points per touchdown pass” rule does make a difference, but CBS players are overvaluing the difference for the top tier a bit. Using our rankings will more likely net you Wilson, Ryan, or Wentz as your QB1.

Again, Mahomes and Jackson are overvalued in ADP (13 and 14) relative to our ranks for that pairing (23 and 27). Murray is also drafted 30 spots higher than our ranking, while seasoned vets Brady and Brees are +25 in ADP relative to our rankings. ESPN players have also made Deshaun Watson the third quarterback at No. 37, while he’s 53rd overall in our rankings and fifth at the position. Using our rankings, you’re more likely to draft Dak Prescott, Josh Allen, Ryan, or Wentz as your QB1.

It will be interesting to see how the Mahomes owners taking the Chiefs superstar eighth overall, on average, fare this year. There is huge opportunity cost taking Mahomes (8) or Jackson (14), with values that are at least half a round cheaper, according to our rankings. The ADP of Brady is more in line with our rankings than CBS and ESPN, but Yahoo players still like Murray (+23) and Brees (+30).

High stakes players are willing to wait on quarterbacks on the front end, with Mahomes going first among the position at No. 20, and perhaps fantasy managers on other platforms should follow their lead. The top tier of quarterbacks in Mahomes and Jackson are not only going later, but also the next tier with Prescott, Murray, Wilson, and Watson are going significantly later than other ADP sources. Picks 60-90 start the mad rush of signal callers, with eight being drafted. NFFC players don’t like Watson, Brady, or Brees nearly as much as other platforms.

Standard scoring (no PPR) generally increases the value of running backs, but that’s not reflected in the second and third tier CBS ADP.  Backs like Mixon, Edwards-Helaire, Sanders, and Kenyan Drake are picked well after the value we reflect for them in our rankings. On the other hand, big names like Gurley and Le’Veon Bell are also valued higher than our rankings. CBS users generally devalue the receiving backs like James White, as a result of the standard scoring system, yet other capable receiving backs like Kareem Hunt and Tarik Cohen are still going well ahead of our standard ranking. We do like Ekeler, Fournette, James Conner, Jonathan Taylor, Jones, Lindsay, and Mack much more than the CBS userbase.

Yahoo users seem to like Ingram (41) and Mostert (49) more than other sources, while, they want very little part of Edwards-Helaire (21), Fournette (40), Bell (46), David Johnson (57), Ronald Jones (97), White (117), Cohen (133), or Zack Moss (159). The platform is generally known for hosting many newer and more casual fantasy players, and that perception is carried out in two rookies being on the lower-than-consensus list. Relative to our rankings, Edwards-Helaire, Sanders, Ekeler, Fournette, Bell, Jones, and Cohen appear to be very strong values.

The high stakes players really like Sanders (9), Aaron Jones (13), Ekeler (15), Gordon (27), Fournette (29), Conner (32), Taylor (33), Montgomery (46), Akers (50), Hunt (56), White (77), Mack (84), and Mattison (97) relative to other ADP sources. There are some unproven players in that group like Taylor, Montgomery, and Akers. Our projections on Ekeler and Fournette are higher than NFFC ADP. Edwards-Helaire, Ronald Jones, Lindsay, Murray, and Gibson are a few other RBs who stand out as potential values relative to NFFC ADP.

It’s an accomplishment for a wide receiver to make the first-round grade in standard scoring, and CBS shows two wideouts in that category. Our rankings for standard scoring see those two receivers, Michael Thomas and Davante Adams, as somewhat overvalued because of the impact of the scoring system, particularly in Adams’ case.

CBS users clearly don’t want to be left out in the cold, taking the top 12 tight ends earlier than our standard rankings, with the values of Zach Ertz, Evan Engram, Hunter Henry, Rob Gronkowski, and Tyler Higbee standing out, in particular.

Simply put, if you use our standard scoring TE rankings verbatim in a CBS draft, you will probably be taking a flier for your starter like Mike Gesicki, T.J. Hockenson, Jack Doyle, or Dallas Goedert. Ending up with two relatively cheap tight ends would not be a bad strategy.

Our tight end values more closely resemble the ESPN ADP, though ESPN players love them some Engram, Henry, and Gronkowski, as well. We actually rank George Kittle one spot ahead of ESPN ADP, and later in the draft Hayden Hurst, Austin Hooper, Gesicki, and Hockenson look like potential values based on our projections.

Like CBS, you’ll likely be looking at fliers if you use our Yahoo rankings vs. ADP. The top 12 are all well ahead of our ADP, while the group that includes Hockenson, Gesicki, Goedert, Noah Fant, and Doyle is higher than ADP in our rankings.

Among the four sources, the high stakes players are closest to our rankings. In fact, the top five tight ends are right in line with our values, but NFFC players like Higbee, Engram, Hurst, and Henry more than our rankings. Our projections see some value with Gronkowski, Hooper, Gesicki, and Hockenson, though notably fourth-ranked tight end Ertz is five spots higher in our rankings than NFFC ADP.