History hasn't been kind to running backs seeking a fresh start elsewhere, and we take a look at how veteran backs have done in new situations, compared to average draft position. 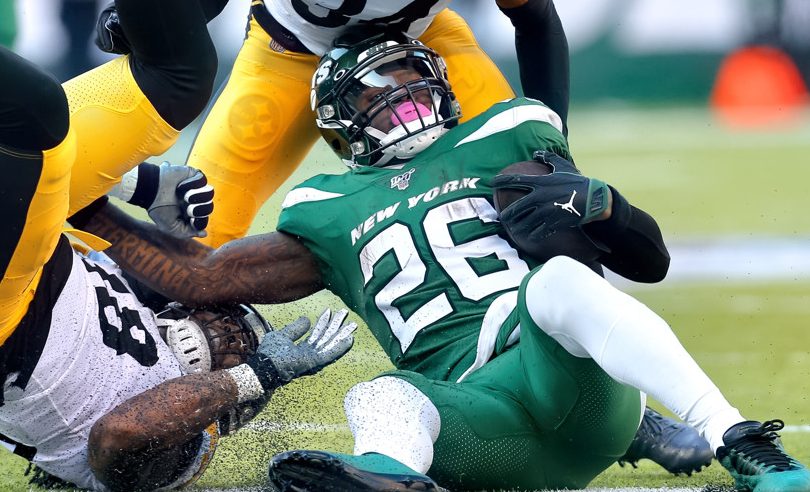 He shall be Le'Veon, but he shall not be a good pick in fantasy with the Jets (Photo by Joshua Sarner/Icon Sportswire)

[Editor’s Note: this article originally appeared in August of 2020. The intro has been updated to account for the season results, but the remainder of the research is as was originally presented.]

In 2020, three prominent running backs played for new teams and were expected to be the starter. The Rams cut Todd Gurley and he signed with the Atlanta Falcons. Arizona traded David Johnson to the Houston Texans, after he was benched in 2019 and replaced by Kenyan Drake. And the Chargers did not give Melvin Gordon the contract he wanted, so he ended up signing with Denver.

The results for those three were decidedly mixed, and mostly disappointing. None of them regained their past form fully. Melvin Gordon did finish the highest, at RB14 in PPR leagues and was a solid if not spectacular return on investment. David Johnson and Todd Gurley both finished below their average draft position, and faded down the stretch, with Gurley largely being benched. He started with 375 rush yards and 5 touchdowns in the first five games, but closed with only an additional 303 rush yards and 4 touchdowns the rest of the year.

As it turns out, the past evidence prior to Gurley, Gordon, and Johnson is not very favorable, either.

Average draft position does matter. If you sort by ADP in the above chart, you can see that the better drafted players tended to perform better. Of the three primary running backs switching teams in 2020, Todd Gurley is being drafted the earliest. The average draft position for Gordon (19) and Johnson (20) is very similar to the group average of 20.7.

How Does That Compare to Running Backs Who Did Not Change Teams?

You are probably curious how that compares to other running backs. To look at that, we compared the PPR fantasy points scored by the player ranked most directly in front of and behind the running back in question in the same season. (For situations where two backs who changed teams were near each other in average draft position, we made sure not to duplicate using the same comparable player for each.)

The comparably drafted running backs, who did not switch teams as veterans, ended up finishing with 157 PPR fantasy points on average. That’s a 28-point increase over the backs that switched teams.

Here’s a comparison of how the two groups finished in PPR fantasy points.

Compared to similarly drafted running backs, those changing teams were more likely to be busts scoring fewer than 125 points (50% to 35%). They were less likely to provide big booms of 225 points or more (10% to 15%).

Running backs who change teams tend to be big names, or backups getting their opportunity in a new place. Fantasy drafters have been eager for them to bounce back or succeed in a new place, but the evidence is mixed as to how wise an investment that is.