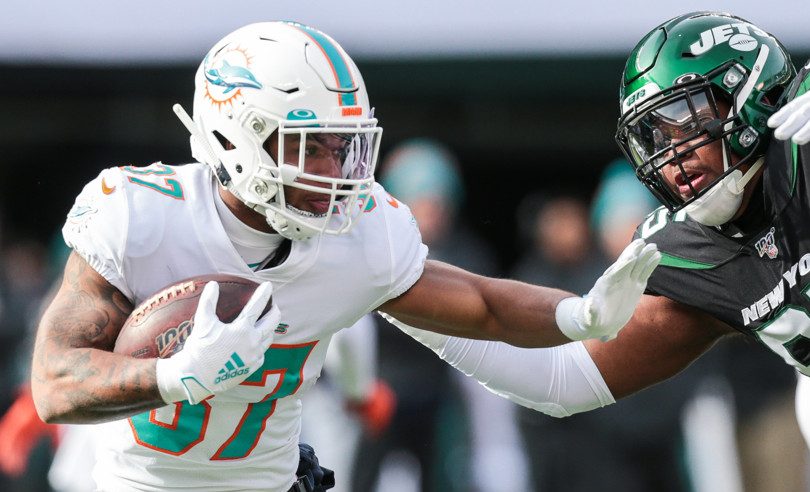 A costly week for the top two fantasy running backs entering the year means some backups will have the opportunity to step up. Here is a rundown of our top waiver wire recommendations heading to Week 3. You can read below for why we have each player on our list.

Christian McCaffrey is expected to miss 4-6 weeks with a high ankle sprain, missing games for the first time in his career. The 27-year old Davis stepped in and got 8 catches in the second half of the loss at Tampa Bay in Week 2. Davis should see feature back touches while McCaffrey is out, making him a pretty good RB2 option if you need a running back starter for at least the next four weeks. He’s always done a solid job when called up, such as when he started the last six weeks in Seattle in 2017, or spelled an injured Chris Carson the next year and had over 100 rushing yards and 2 touchdowns.

He’s not going to be Christian McCaffrey, but If Davis can also add a lot of catches from Bridgewater, he can put up solid production and be a weekly start. Feel free to spend 40%+ of your Free Agent Budget if getting the 12th to 15th best RB starting option for the next 4-6 weeks will provide a big upgrade to a RB or Flex spot.

Devonta Freeman had held out from signing with a team in the preseason looking for a better opportunity. With Saquon Barkley’s season-ending injury, he got that opportunity with the New York Giants, just signing a contract on Tuesday. The Giants’ offensive line isn’t great, and they are likely to be trailing a fair amount, but Freeman should project as the lead starter in a potential committee with Dion Lewis (and maybe Wayne Gallman) once he works into the lineup. Whether he will see a full load this week is a question.

Freeman looks like a flex/matchup type start for the rest of the season. He wasn’t very productive last year in Atlanta, so the question of how much he has left should be answered with this opportunity.

The bad news is that Myles Gaskin continues to be part of a three-way platoon in Miami. The good news is that he has looked like the best option through two weeks, and could continue to expand his role. He’s already had 10 catches in two games and looks to have value in PPR, and if the team gives him more touches going forward, he could become a RB2 option. He also has a great matchup against Jacksonville on Thursday (remember how many receptions the Jaguars gave up to the Colts’ backs in Week 1) and could merit a start based on it if you miss out on Davis this week.

The Atlanta Falcons offense looks like it will continue to pile up high passing numbers and be in shootouts all year. Russell Gage already had some potential value in that offense, but so far he has exceeded expectations. Gage has 21 targets through the first two games, putting him ahead of both Julio Jones and new tight end Hayden Hurst in that regard. Should you expect him to continue to see more looks than Julio Jones? Probably not, but even if he gets a few less targets, he should still be a potential starting option based on matchups.

So far, Shenault has shown some value as both a receiver and a runner. After getting two rush attempts in the first game, he had five more in Week 2, to go with three catches. That kind of versatility should allow him to continue to carve out a role in this offense as a playmaker. Right now, teammate Keelan Cole has seen a few more targets, but Shenault is our pick to continue to expand his playmaking role as a rookie.

With Saquon Barkley out, Lewis could be the immediate beneficiary in Week 3 if the Giants limit Devonta Freeman’s usage after just signing with the team. Lewis also has some value as the second back in a committee, and a receiving/third down back going forward in a team that will likely be passing it more.

We highlighted Smith last week, and he had a solid week in the first game where the Saints were without Michael Thomas. He finished with 7 targets, 5 catches, and 86 yards, all good for 2nd on the team behind only Alvin Kamara. He easily outproduced 33-year-old veteran Emmanuel Sanders (33 yards through two games), and if he plays well in Thomas’ absence could easily be the second option in this offense ahead of Sanders when Thomas returns. With a matchup against the Packers where the Saints will likely need to be productive in the air, Smith is a sneaky start this week.

Mo Alie-Cox got an opportunity in Week 2 with Jack Doyle out, and had a big game. Alie-Cox finished with 111 receiving yards on 5 catches. College basketball fans will remember Alie-Cox as a forward at VCU (basketball players make good tight ends, people!). In limited action in the last three years, behind Doyle and Eric Ebron on the depth chart, Alie-Cox has averaged over 11 yards per target. That kind of efficiency could lead to an increase in volume, especially on a team that just lost slot receiver Parris Campbell.

Schultz had 13 career catches in his first two seasons. But with Blake Jarwin’s season-ending injury in Week 1, Schultz got his chance and capitalized in Week 2. He finished with 9 catches, 88 yards, and a touchdown. Sure, the Cowboys aren’t likely to be in a shootout every week where they throw it 47 times trying to comeback. It’s at least encouraging, though, that Schultz saw more targets than any of the Cowboys’ wide receiver trio for one week, suggesting he might be worth a deeper look to see if his role continues as a quick short-area target in the offense.

This one is a look-ahead option trying to buy a player before he has more value. Jets head coach Adam Gase seems far from enamored with Le’Veon Bell even before his injury. Veteran Frank Gore averaged an uninspiring 3.0 yards a carry on 21 attempts last week. The offense needs a major shot of energy. Perine missed much of the preseason training camp with injuries, and also was unavailable in Week 1. He did get a few carries last week in his first week back from injury, and that role could expand (if Gase actually decides that giving Gore 20+ carries is a waste of time). It’s a speculative add but these kind of adds are what is needed if you play in competitive leagues or those with a finite spending budget.