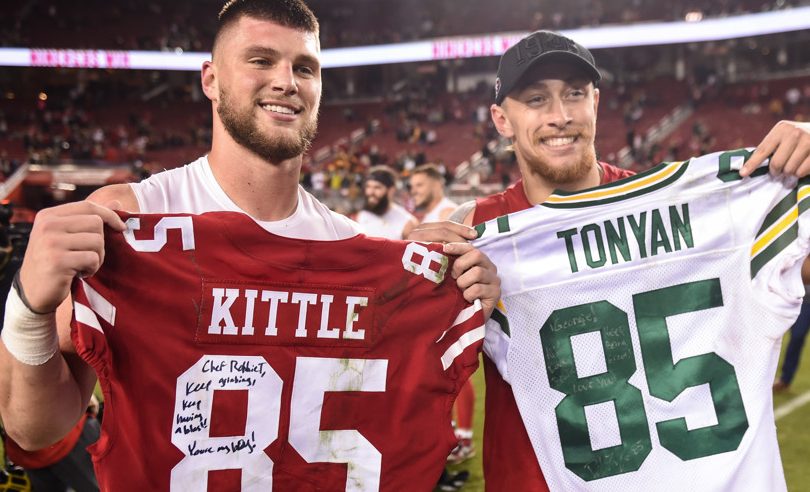 This week’s waiver wire recommendations bears some resemblance to last week’s, as several younger receivers are still appearing outside the Top 50 in wide receiver roster rates despite showing they belong. Add in a tight end breakout and some more running backs with a change to emerge due to injuries, and this week provides some under-the-radar choices that could improve your roster.

Here is a rundown of our top waiver wire recommendations heading to Week 5. You can read below for why we have each player on our list.

Others to consider: QB Jimmy Garoppolo (offensive receivers getting healthy, could be back soon, and defense impacted by injury relative to 2019); WR Zach Pascal, Indianapolis (favorable matchup against Cleveland); RB Gus Edwards (gets touches when Baltimore is winning, favored by two touchdowns this week); WR Darnell Mooney (appears to have surpassed Anthony Miller at WR in Chicago).

Robert Tonyan had his breakout performance with 3 touchdowns on Monday Night Football. Sure, Tonyan is probably not going to have a touchdown game like that again. There have been only 15 such games in the last 20 years by a tight end, and no one has done it twice in that span. But he has been a big part of the passing attack, and the Packers’ offense is cooking. Davante Adams being out certainly helped him get some looks for the touchdowns, but he should still have plenty of opportunity in an offense where Allen Lazard is out for awhile and a second option is needed.

The Packers are on a bye this week, but Tonyan should be a Top 10 option going forward if you need a starting tight end.

Kenyan Drake could be out or limited in next week’s game against the Jets, and Edmonds looks like he could earn a bigger share of the touches going forward. He’s been the far more utilized back as a receiver, and this week’s matchup against hapless New York presents a tasty option. Even if Drake is active, Edmonds is a starting option in PPR leagues, and if Drake is out, it’s full steam ahead.

D’Ernest Johnson had five career rush attempts before Sunday. But after Nick Chubb left with an injury, Johnson carried it 13 times for 95 yards. Chubb looks like he will miss about six weeks, and Johnson should move into a platoon situation with Kareem Hunt. He may not get all of Chubb’s work, but he should get enough in a run-heavy offense to justify a flex start based on matchup while Chubb is out.

We highlighted Higgins last week, as A.J. Green has been very unproductive in his return at age 32. That shift from Green to Higgins continued again in Week 4, where Higgins had 90 total yards and Green finished with 3 receiving yards on 5 targets. If Higgins is available, he’s a great upside addition as he continues to grow with fellow rookie Joe Burrow.

Tre’Quan Smith has appeared in our top ten recommendations three weeks in a row, and if you had started him last week you would have gotten two touchdowns. Smith continues to play well with Thomas out, and the third-year receiver is a viable option even after Thomas returns. He’s currently 41st in PPR scoring at WR and should be rostered if you need depth at the position.

Harris had 100 rushing yards in his first game this season. He would be much higher if his role was clearer, but it is the Patriots and you never know week-to-week which back will get the most points. Sony Michel was inactive for the game last week, and it’s possible that Harris takes his role. That role would likely involve very few receptions but the potential for carries and red zone opportunities in a good matchup. With Denver up this week, he is a viable spot start.

Check to see if an impatient owner let go of Christian Kirk after his injury and slow start. If you are looking ahead at having to fill some bye weeks in Week 6 and 7, Arizona plays Seattle and Dallas, two teams that rank near the bottom of the NFL in stopping wide receivers so far.

Aiyuk flashed his athleticism on a touchdown run against Philadelphia where he hurdled a defender, and he’s now scored on two rushing plays this year. With the 49ers D losing so many good players, the 49ers could have to outscore teams going forward, which could create more opportunities. Oh, and quarterback Jimmy Garoppolo should be back soon. It’s hard to recommend Aiyuk as more than a spot start/end of roster addition right now because his opportunities will be inconsistent with George Kittle and Deebo Samuel back, but he should be stashed for his potential upside.

O.J. Howard suffered a season-ending Achilles injury in Week 4, and Rob Gronkowski has 88 total receiving yards in four games. None of the top four receivers practiced on Tuesday, and Tampa Bay has to turn around on short notice to play the Bears on Thursday night. Brate could play a much bigger role in the game plan on Thursday, and could provide more value than a past-his-prime Gronkowski as well going forward.

With Austin Ekeler out for awhile, Jackson will get carries as the second back behind Kelley. He’s a low-end platoon option based on matchup over that time until he shows more (or unless Kelley’s fumbling issues from the last few games continue).

If you need a quarterback streaming option, taking Cousins in a matchup at Seattle is a decent play. The Seahawks have allowed the most receiving yards this season, and the Vikings have found a second option in Justin Jefferson to pair with Adam Thielen in the last two weeks, which has made Cousins’ productivity go up.