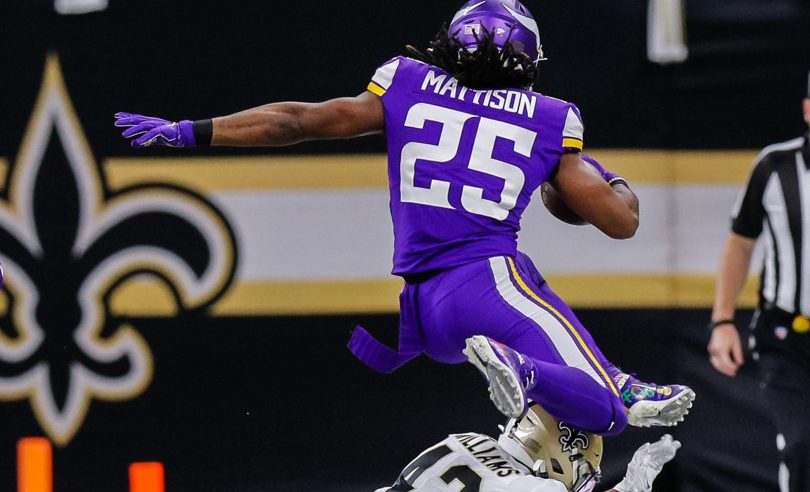 His name is Alexander Mattison. And there's a million things he hasn't done. But just you wait. (Photo by Stephen Lew/Icon Sportswire)

A couple of breakout performances, a key running back injury (for at least one game), and a major QB injury highlight this week’s waiver wire.

Here is a rundown of our top waiver wire recommendations heading to Week 6. You can read below for why we have each player on our list.

The only thing holding back Claypool this year was just enough opportunity in the Steelers’ offense. He was on a team that already had JuJu Smith-Schuster, Diontae Johnson, and James Washington also playing receiver. But Claypool’s Week 5 performance with Johnson out has let the genie out of the bottle, and how does Pittsburgh now not give him regular opportunities? Claypool had 7 catches for 110 yards and scored 4 touchdowns (1 rushing).

Where will he fit week-to-week? We don’t know, but he has an enough upside after this breakout performance to merit a big bid or priority waiver slot.

Dalvin Cook will miss Week 6, before a Week 7 bye week for the Minnesota Vikings. Mattison is one of the best backup options in the league, and showed that with over 100 yards rushing against Seattle once Cook left the game. With a matchup against Atlanta this week, he’s in a great spot to be a Top-8 option at RB this week. It may just be for one week, but it is an impact start if he is available.

Dalton is not Dak Prescott, particularly with his legs. But there are enough offensive weapons in Dallas, and the defense has struggled enough, that Dalton projects as a top 15 QB option going forward, and should be considered as part of a QB platoon. And if you had Prescott, you should really be in the running for Dalton. He’s likely close to what you would acquire if you were going for a decent option in trade, without having to further diminish your roster.

Fulgham broke out with over 150 yards and a touchdown on 10 catches for Philadelphia. The Eagles desperately need receiving help, and Fulgham (signed after being released by Detroit earlier) stepped into that void in a big way. There’s plenty of uncertainty here, as the Eagles should get some receivers back soon. But there’s no guarantee that aging veterans like Alshon Jeffery and DeSean Jackson will rebound, so Fulgham is worth a shot if you need receiving help. Sure, there have been some flukes in opportunities like this, but also plenty of cases like Victor Cruz or Miles Austin emerging with an opportunity and having big fantasy seasons.

As we noted last week, many may have given up on Kirk after a slow start, but the upcoming schedule is tasty. Kirk finished with 5 catches for 78 yards against the Jets, and has Dallas, Seattle, and Miami in Arizona’s next three games.

Sammy Watkins is expected to miss a few weeks, which bumps up Hardman’s status in the Chiefs’ offense and makes him a higher upside flex play while Watkins is out.

Williams, after frustrating owners, had a two-touchdown game after Keenan Allen left with his own injury. The Chargers are on a bye, but if you are churning the bottom of your receiving depth chart, Williams has enough value if Justin Herbert continues to emerge (and the Chargers’ coaching staff starts to let the training wheels off and not get so conservative) as the season progresses.

Jackson finished with 15 carries and 5 catches in the first game without Austin Ekeler playing, outproducing rookie Josh Kelley for at least one week. The Chargers are on a bye in Week 6, but Jackson is a flex option against Jacksonville in Week 7 if you are looking ahead.

We’ve been touting Higgins as surpassing A.J. Green now for several weeks. He saw another 8 targets on Sunday, even though the Bengals offense struggled. The matchup against Indianapolis isn’t great, but Higgins is a good player to stash for the second half of the season.

Brate outproduced Rob Gronkowski slightly in the first game without O.J. Howard and is a low-end starting option if you need help at tight end this week, in what should be a game where the Bucs have to pass more against the Packers.