The initial release of our 2021 NFL preseason rankings sees Kansas City and Tampa Bay topping the charts, with San Francisco on the rebound. 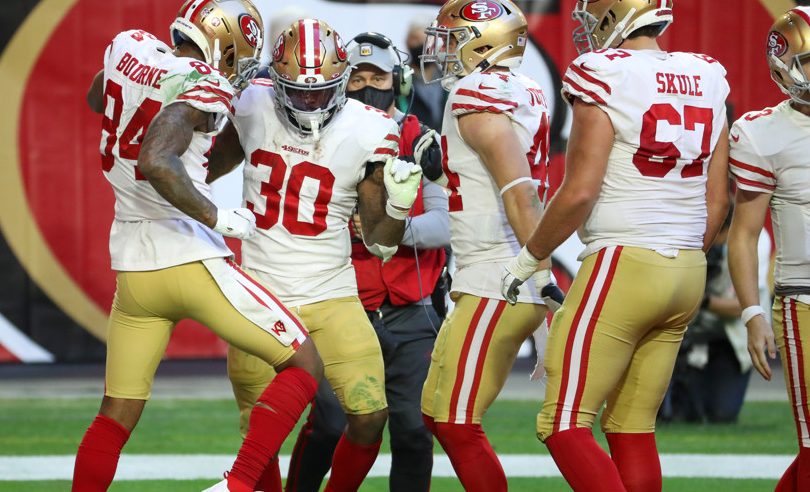 Our official 2021 NFL preseason rankings and predictive ratings have arrived. And earlier than usual, to boot.

If you’d like to learn about the methodology behind our mostly data-driven preseason team ratings, make sure your read our post on how we make NFL preseason rankings.

To see the 2021 rankings, keep reading, and find out how good (or bad) we expect all 32 NFL teams to be this year.

The table below shows our 2021 preseason ranking of all 32 NFL teams, along with each team’s associated preseason predictive rating (e.g. +7.0 for Kansas City).

The team ratings are expressed as points better (positive rating) or worse (negative rating) than a “perfectly average” NFL team, when playing on a neutral field.

This is the earliest we have released our rankings, and these rankings could still change based on big moves in the summer. For example, if Deshaun Watson or Aaron Rodgers were to change teams, or if something else unexpected happened (like when Andrew Luck retired right before the season a few years ago), it could have a big impact on the outlook for some teams. Barring major changes though, now that we are through the draft and free agency, these rankings should be similar to where the final preseason rankings will end up right before the season kicks off on September 9th.

Using more than a decade of NFL data, we’ve identified team-level stats and characteristics that are highly correlated with success in an upcoming NFL season.

Just as importantly, we’ve worked to identify and ignore information that isn’t impactful. You can build all sorts of qualitative narratives that attempt to presage why an NFL team might be good or bad this season (great new rookies, motivated from losing in the playoffs last year, etc.). But often times, theories like these aren’t confidently substantiated by historical data-based testing.

(For example, we have not found a strong correlation between the quality of a team’s most recent draft class and its upcoming season performance. However, the quality of draft classes three and four years ago does seem to make a difference, presumably because it takes a few years for most talented rookies to develop into higher performers.)

While we encourage you to read our full preseason rankings methodology, here’s a quick explanation of the factors we currently use in our NFL preseason ratings:

Here are some other observations and notes from our preseason rankings:

The two Super Bowl teams, Kansas City and Tampa Bay, lead the way in our ratings in 2021. Baltimore is a little more than a point below Tampa Bay, and then there’s a gap of two points between those three teams and the next tier of teams. Baltimore actually had the best point differential in the NFL last year in the regular season, but lost close games and those against the tougher teams on the schedule, and tended to blow out bad teams. Just two years ago, though, they had the NFL’s best record at 14-2, and still have a young core led by dynamic quarterback Lamar Jackson.

This marks the second straight year that Kansas City leads the ratings entering the season, and it’s becoming a trend since Patrick Mahomes became quarterback, as the team has compiled a 43-10 record (including the playoffs) in games that Mahomes has started over the last three years. Tampa Bay, meanwhile, surged to the Super Bowl title in Tom Brady’s first season with the Bucs, and returns basically everyone from last year’s team.

The San Francisco 49ers, coming off a Super Bowl appearance after the 2019 season, had a disastrous injury-riddled 2020 season that saw them lose several key players. Dallas, meanwhile, lost quarterback Dak Prescott after only five games and finished at 6-10. New England experienced life without Tom Brady for the first time in a long time, and missed the playoffs at 7-9.

Our predictive ratings expect a bounce back for all three, with San Francisco (which will have either Jimmy Garoppolo or rookie third overall pick Trey Lance at quarterback) at No. 6 in the ratings. Dallas and New England are also in the upper half of this year’s ratings after notable dips a year ago. Dallas will get Dak Prescott back, while the Patriots added rookie quarterback Mac Jones to compete with Cam Newton, and signed several prominent free agents on offense, including  tight ends Hunter Henry and Jonnu Smith, and wide receiver Nelson Agholor.

Houston has a problem, and Detroit is rebuilding the engine as well

Houston had a tumultuous offseason, and the expectations are low entering this year. Quarterback Deshaun Watson demanded a trade (and has legal issues that could keep him off the field anyway), the team lost several prominent veterans including franchise leader J.J. Watt and leading wide receiver Will Fuller, and has hired 66-year-old David Culley as a first-time head coach. Our projections currently assume that Watson has only a small chance of playing in Houston this year, and that the quarterback situation will likely be significantly downgraded. As a result of that offensive uncertainty and already having one of the worst defenses in the league a year ago, Houston checks in as the last-ranked team.

Detroit is just above them, after trading away QB Matt Stafford in a deal with the Rams, acquiring Jared Goff in return. The Lions appear to be in major rebuilding mode, and the team basically gutted the receiving group. After letting Kenny Golladay (Giants) and Marvin Jones (Jaguars) leave, the receiving group may be the worst in the league.

Some people get quite worked up about preseason NFL rankings — especially when our approach suggests their favorite team is going to be worse than the prevailing consensus.

That’s to be expected. No one else ranks teams exactly like we do, and our approach often discounts the impact of things that many media analysts and football “experts” believe to be important.

We also have a very specific goal for our preseason NFL team ratings, which relates to predicting the margins of victory of future NFL games. That goal doesn’t line up exactly with the motivations of many other rankings makers.

Just keep in mind that predicting how 32 different NFL teams are each going to do this season, before any of them have played a regular season game, is no easy task. No system is perfect, including ours. It has strengths and weaknesses. We expect to get some teams slightly wrong, and some other teams very wrong, for a variety of reasons.

But in the longer term, our approach has done very well when measured by the yardstick that means the most to us: the overall accuracy, across the entire universe of 32 NFL teams, of projecting team performance levels at the end of the upcoming season.

Look at Ratings, Not Just Rankings

Finally, please remember to look at team ratings and not just rankings, because ratings tell a much more precise story.

For example, in 2021, 4.0 ratings points separate No. 1 Kansas City from No. 5 Green Bay. That’s more than the difference between Green Bay and No. 21 Tennessee (3.2 ratings point difference). So Green Bay finishing below Tennessee would be no greater surprise than them overtaking the Chiefs, even though they are 5th in the power ratings.

Meanwhile, only one point separates teams ranked 13th (Indianapolis) to 21st (Tennessee) so it’s more accurate to view all those teams as part of the same tier.

So don’t overreact to a team’s ranking number. Look at the rating as well, and you’ll be able to tell which generally expected performance tier a team is in.

If you’re in an NFL pool or you’re betting games this season, check out our Football Pick’em Picks, NFL Survivor Picks, and NFL Betting Picks.