Pay Attention to Your League Scoring System and Rules

Your approach to drafting and setting your fantasy football roster should depend on the scoring system and rules. We look through some variations. 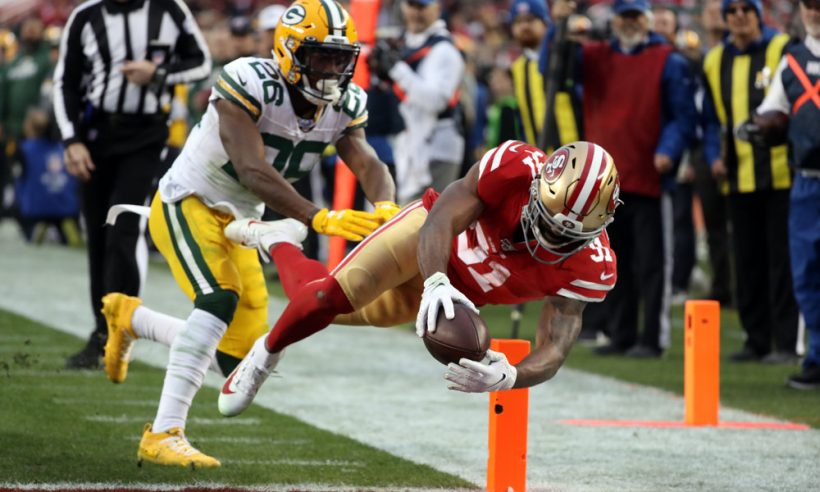 Like a lot of players, Raheem Mostert's final value in fantasy football depends on the scoring (Photo by Kiyoshi Mio/Icon Sportswire)

[Editor’s note: this article originally appeared in August of 2020.]

One of our core pieces of advice for for pool pick strategy is to know your pool’s rules and scoring. Different rules lead to different underlying strategies. The same is true for fantasy football. There is no such thing as a universally great pick or poor one. Things like the scoring format, league size, roster size, and starting requirements can alter a specific player’s value.

Here’s one example of a situation where a lot of fantasy football players do not truly account for how scoring system affects value. Let’s look at top quarterbacks and how you should value them depending on whether the league uses PPR (point per reception) scoring or not.

The draft positions are very similar. The quarterbacks are being drafted in standard (non-PPR) formats only about 3 slots differently than in PPR scoring formats.

But does this make sense? Here is where the top 6 quarterbacks are in our rankings, for a 12-team league, depending on the scoring format.

While less than 3 spots separate the same quarterbacks in average draft position for Standard and PPR leagues, they are separated by more than 17 spots in our standard fantasy football rankings versus our PPR rankings. The same Top 6 quarterback is ranked 17 places higher (nearly a round-and-a-half in 12-team drafts) if there is no point given per reception.

Why QBs are Less Valuable in PPR

You might wonder why this is the case, if quarterback scoring is generally the same in the two formats. It’s related to the value of the other players. When you add in points per reception, the top players at the other positions move up. Quarterbacks represent a smaller percentage of the total points for a fantasy team when PPR is used. That, in turn, reduces their value.

Our underlying point projections for the quarterback are the same. Their true value, though, depends on the rules of your league.

You should be a little more willing to take quarterbacks early in Standard leagues, and less likely to do so in PPR formats, if the vast majority of users are relying on average draft positions and rankings and don’t adjust their strategy to the specific rules.

Common Scoring Systems and Rules, and How They Affect Strategy

Quarterbacks in PPR are just one example of how a rule can impact value. Here are some common rules variations and systems to consider, and how each should impact strategy.

One big factor is league size, because this impacts how scarce players will be. As league size increases, the value of the players at positions that are more limited in real life should move up, relative to more commonly available positions. Take QB as an example here. There are 32 real-life starting quarterbacks, and it’s a position where backups do not score much. Meanwhile, you might have 90-100 Wide Receivers who are playing most of a game each week.

In a 10-team league, the differences will not be as pronounced. Even if everyone carries two quarterbacks on their roster, and maybe even if a couple of fantasy owners carry a third one, you should still have 8-10 quarterbacks available as replacements if needed. Move to a 14-team league, though, and that changes. If everyone carries two quarterbacks, all the guys who are safe starters are gone, and you are down to the last handful of quarterbacks each week, and may have no options depending on the number of teams on a bye week.

Wide receivers aren’t impacted to the same degree by moving from 10-team to 14-team formats. So you should see the value of the top quarterbacks go up in larger leagues, relative to wide receivers, compared to 10-team leagues.

The number of roster spots each team gets is another factor that can drive value. Similar to the league size question, what you want to consider is what type of player will likely be available on the waiver wire if you need to add someone.

If you are new to a league, you should look at past draft or end-of-year rosters to see the total number of players on rosters at each position.

There are more scoring formats/variations than we could possibly list here. Some common variations include:

The most important thing you can do is to read your league rules to make sure you understand what scores points. You then need to adapt your thinking to any unique variations.

If tight ends get more points per reception than other positions, that increases the value of the top TE options. Just going by average draft position lists might lead you to undervalue the position.

Passing quarterbacks have more value in leagues that reward pass TDs with 6 points instead of 4 points.

Receiving backs, wide receivers, and tight ends have more worth in PPR leagues than in Standard leagues. And as we saw above, that means quarterbacks have a little less value in PPR.

Pay attention to the starting requirements. This includes knowing whether you start one quarterback or two, and how many running backs and wide receivers you can start.

Another variation is the use of “Flex” spots. This means that you have the choice of starting a player from one of several positions: RB, WR, or TE.

That allows more flexibility in drafting. If a league requires 2 RB, 3 WR, 1 TE, and 1 FLEX, you don’t have to be as concerned about position scarcity at RB as you would if required to start a third running back every week.

“Super Flex” leagues provide a twist on the Flex concept. You can start a 2nd QB, in addition to RB/WR/TE, in the Super Flex spot. This practically creates a two-quarterback starting league, since quarterbacks tend to be among the highest scorers. This, in turn, dramatically increases the value of quarterbacks in Super Flex leagues. You don’t want to use standard draft positions to make your picks for such a league.