Odds, predictions, trends, and news for the Week 3 Thursday Night Football matchup between the Carolina Panthers and Houston Texans. 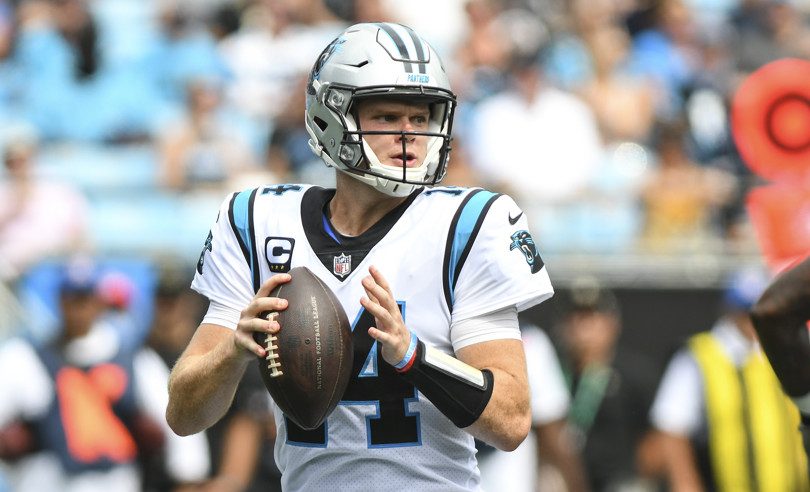 After placing Tyrod Taylor on IR with a hamstring injury, the Houston Texans will turn to rookie QB Davis Mills for their Week 3 Thursday Night Football clash with the Carolina Panthers.

Meanwhile, the Panthers are one of the early surprises of the 2021 season. They’ve started 2-0 with new quarterback Sam Darnold, who looks far better after pulling a Kurt Russell and escaping from New York.

Davis Mills Gets The Start

With Taylor on IR, the Texans will turn to Mills, a third-round pick out of Stanford, as their starter. Deshaun Watson, who remains sidelined because of an ongoing legal investigation, will not be active.

Mills played the second half of Houston’s Week 2 loss to Cleveland and didn’t exactly stand out in his debut. He went 8-for-18 for 102 passing yards, threw an interception in the third quarter, and fumbled on a sack (though Houston recovered it).

Two years ago, we took a look at how first starts for non-first-round quarterbacks turned out, which may be of interest as you assess Mills’ outlook.

The Carolina defense has gotten off to a great start in 2021. It currently ranks first in all of the following categories:

Of course, two games don’t mean a ton, and we’ll see how that performance holds up as the Panthers face tougher competition over the course of the season. But Carolina’s defensive line and pass rush has been fierce so far, so a rookie like Mills could be in for a tough night.

Carolina’s defense faced the Jets and rookie QB Zach Wilson in Week 1. They then dominated the Saints last week, though New Orleans was without several offensive assistants. Still, holding a team coached by Sean Payton to six total first downs is typically an impressive feat.

Football Outsiders has Carolina ranked as the No. 1 team (before opponent adjustments) through two games on the strength of the defense.

Using the most similar games from the last five seasons, where the spread was approximately 8.0 points and over/under was approximately 43.0 points, here are the average offensive statistics for teams like Carolina (favorite) and Houston (underdog).

Here are the most common over/under totals on some key players for Thursday Night Football:

Here are some promotions available at various sportsbooks for Week 3: